by Cooper 8 years ago 3 min read 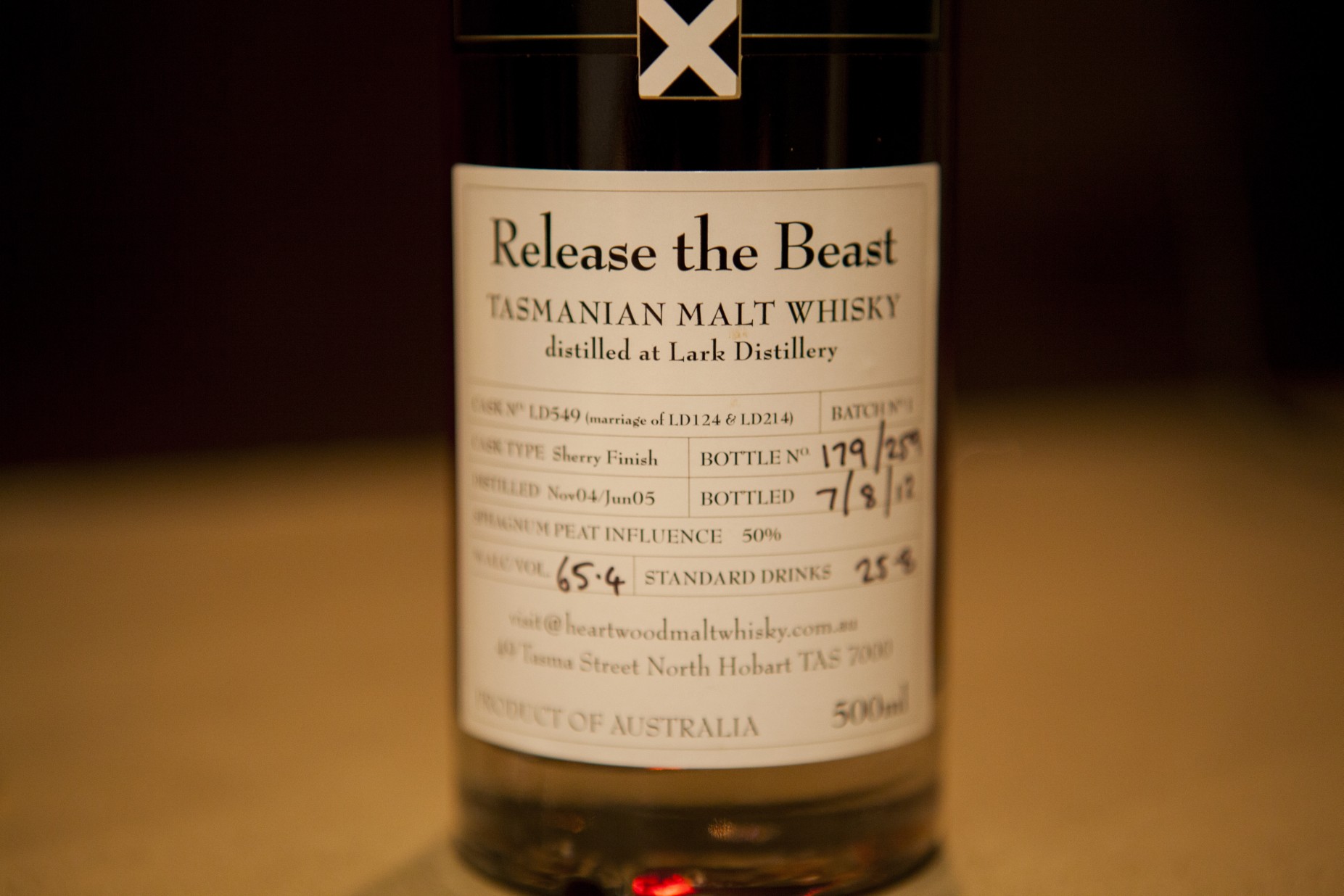 On a hazy evening in Melbourne not too long ago at Chez Regine (now Whisky and Alement) I had the privilege to try a dram of the Heartwood ‘Release the Beast’ Tasmanian single malt whisky. Having heard a lot about it through friends I was naturally quite excited to try it. I wasn’t disappointed.

Coming in at a whopping 65.4% ABV you can be excused for thinking this stuff will burn your mouth out. In reality however it is one of the most complex and alluring malts I have ever had.

Tasmanian Heartwood Malt Whisky started in 1999 and is owned by Tim Duckett. Currently holding over 10000 litres of whisky, including some the oldest produced in Australia. According to bits and pieces I have been able to gather from the internet the history of this whisky is quite interesting. It was initially distilled at Lark Distillery and matured in two 100ltr port casks for 3yrs before being married into a 200ltr Australian Sherry cask for a further four years. Have a moment to take that in. Interesting regime that has created an absolute winner.

Nose: Caramel, toasted hazelnut, underlying sweetness of port at the back. Carries wafts of varnish and espresso. Lightest dabs of peat. After having had a sip or two the nose becomes more refined.

Palate: Release the Beast indeed. Intense mouthfeel. Creamy vanilla, sherry, and espresso hints followed by a gorgeous sweetness. Holding in the mouth turns it to nectar. First sip doesn’t do it justice.

Finish: Have you got a while? Hazelnuts, dark chocolate and espresso with a sweet drying touch of oak for good measure. Just lines the mouth and doesn’t dissipate. Hints of juicy red fruits on the outset just in time for the peat to make it to the party.

Mr Duckett, you are on to a good thing. Seriously.

There is basically no stock of Release the Beast left that I can find however I noticed this evening on the Heartwood website that there were two bottles available released from the archive. I have one put aside for later consumption and am really rationing the last 100ml or so from my second bottle. Its been hard to hang on to as each time I have a friend over who enjoys whisky I pretty much force them to try it. None have regretted it. I can see those last few bottles getting snapped up pretty quick if they are even still available.

Regular readers would know I really enjoy a smoky dram. I have long thought that Tasmania with its ample supplies of peat would be a great place to produce peated whisky. I have heard on the grapevine recently that the Heartwood venture will soon have some 100% peated whisky in sherry casks coming up. Would love to see what a 100% peated bourbon cask would come out like too.

Just to throw it out there now in advance I reckon the first 100% peated bottling from Heartwood should be called “Heartbreaker” or “The Heartbreaker”. If it’s anywhere near as good as my instinct tells me it will be, it will break hearts. Many of them.

This is a dram that should be enjoyed slowly. Very slowly. Some good company wouldn’t go astray either.

I didn’t have too much difficulty selecting some music to go with this whisky. The song is called ‘Release the Beast' and is by Breakwater, a funk and soul band from the USA formed in 1971. It's a funky track with some cool 80's synths. Makes you want to bust out a move or two, but you probably shouldn't. You might spill some of your dram. Interestingly Daft Punk sampled this song for their track 'Robot Rock’.