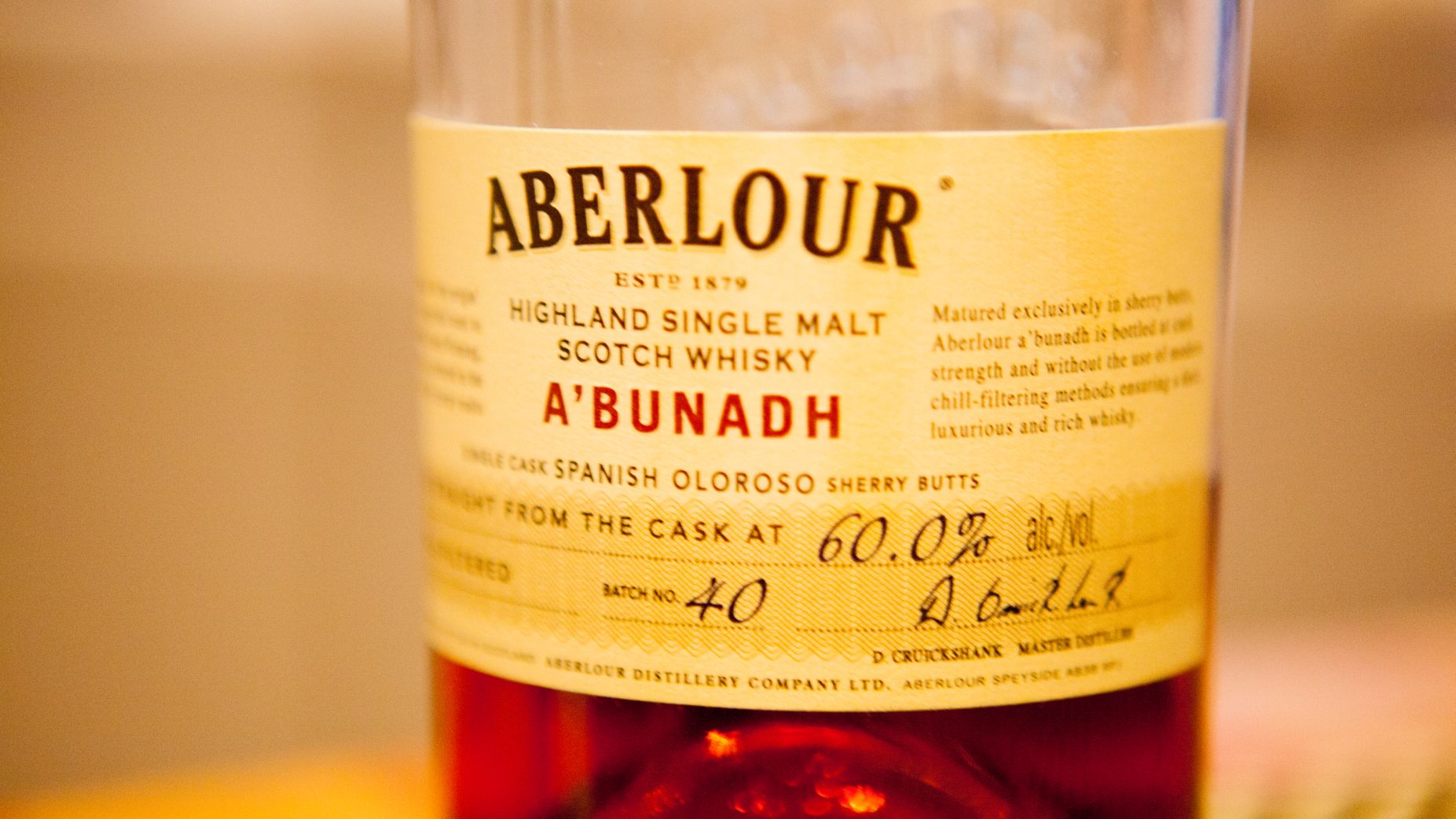 Aberlour A’bunadh, you are one dark whisky. Holding it up to the light, it’s a dark amber and it truly looks remarkable in the bottle. The Spanish Oloroso casks have really worked their way into this whisky. To be blunt this is a serious drink. One doesn’t just open a bottle of Aberlour A’bunadh and have a few drams. It’s a serious experience. Being surrounded by fine mahogany furniture and leather bound books should be a prerequisite.

"A’bunadh, Gaelic for ‘of the origin’, is matured exclusively in Spanish Oloroso ex-sherry butts. It is a natural cask-strength malt whisky produced without the use of modern-day chill filtering methods or the addition of water. Rumour has it that when the second pair of stills were put in in 1975, a time capsule was discovered behind the name plate, containing an 1898 newspaper about the distillery fire wrapped around an 1898 bottle of Aberlour. The workmen who discovered the bottle polished off four-fifths of the bottle during their lunch break, but the remains of the bottle went off to the laboratories in Keith, and were analysed. A’bunadh is an attempt to recreate this single malt."

Very high on the ABV charts this whisky really packs a punch, both in flavour and in complexity. I honestly don’t know if I have fully figured this whisky out yet…

Nose: A deep sherry and brown sugar uppercut. Some caramelised bananas and spice.

Palate: This one is very smooth for a whisky with such a high ABV content. Sherry is the dominant element with a sweet peppery tang upon chewing. Some alcohol laden orange and Christmas cake spice comes through.

Finish: Ethanol on exhaling, bringing back memories of cleaning computer internals. Sherry is still dominant with oak, spice, and hints of pepper.

A whisky like this doesn’t need an age, it just works. The master distiller, James Fleming, has really produced a cracking dram here. I hope that Aberlour continue to produce this product well into the future as it has a firm spot in my whisky rotation. With each batch being somewhat limited, although I’m not sure on the numbers released, we get to try a quality cask strength product with subtle yet welcome differences between batches. I have tried two other releases and will be reviewing them in good time.

Also interesting to note the bottle lists this as a Highland malt, yet Arberlour is in Speyside. After checking other bottles it seems some are Highland, others Speyside. Most interesting.

My music recommendation for this Aberlour offering is one of my favourite from the Afrobeat genre by Fela Kuti. He was a Nigerian multi-instrumentalist musician and composer, pioneer of Afrobeat music, human rights activist, and political maverick who passed away in 1997. A great introduction to his music is the album “The Best of the Black President”.